In the summer of 2019, the state-of-the-art Tong Family Marina opened to serve the Hoofer Sailing Club, the Union, campus and the greater Madison community with a total renovation of the shoreline and lakeshore path between the Union and the Limnology Building. For the sailing club, a combination of year-round fixed decks and floating piers will help ensure the club can continue to offer an extraordinary experience for all of its members.

The new piers replaced the decades-old infrastructure from the early 1980s. Originally designed and built by Dick Sharkey (former Commodore & Shop Director), the previous piers served the club extremely well. After nearly 4 decades, the summer of 2018 was their last.

Starting in October of 2018, the old infrastructure was retired and work on the new lakeshore and marina begun. Working through the dead of winter, crews drove piles for the new fixed decks, the davit crane platform and a few hundred few of new sheet-pile seawall from the Lake Lab to Limnology. With the thaw, concrete helped shape the new lakeshore path and the club took delivery of the 4 floating piers (Sloop, Scow, T-Dock and Laser/Byte).

One of the most exciting additions is the massive 192-foot wide T-Dock that services the Tech, Zest and 420 fleets. In addition to providing storage for the fleets, the shape provides small harbors behind the T, which shields beginners from the worst of the waves on the notorious northwind days.

With the complete renovation of the shoreline, wave abatement has been significantly improved and a concrete platform was constructed for a brand new Davit crane. Once complete, the club will be able to lift keelboats in and out of the lake using our own facilities. 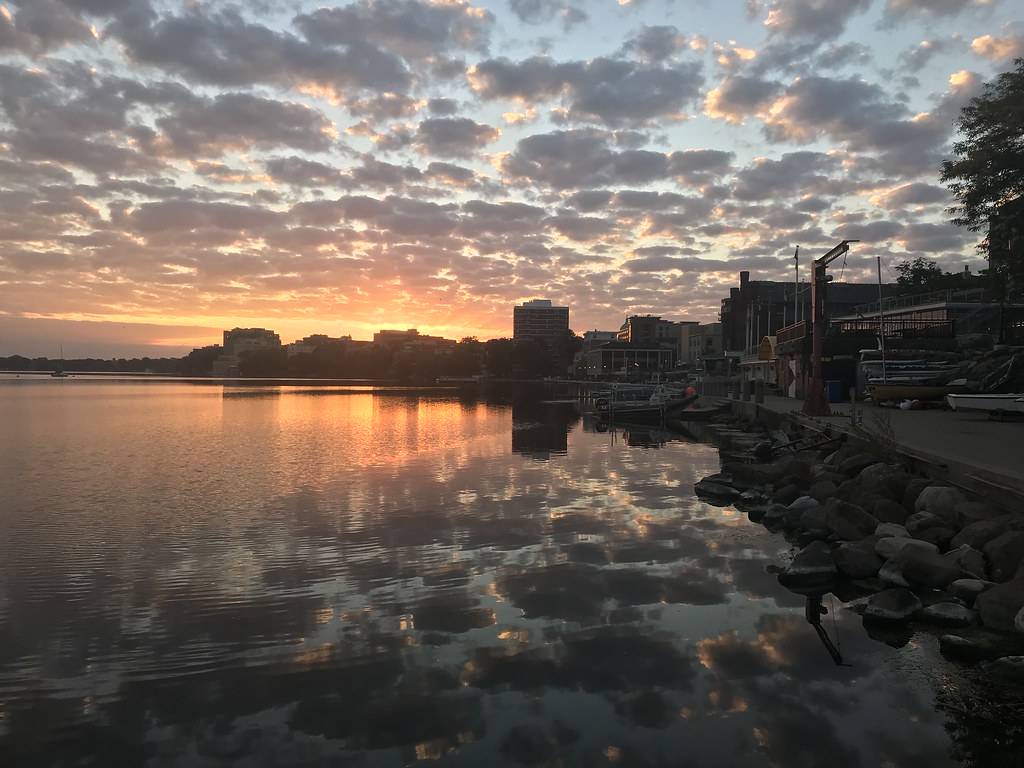 The Wisconsin Union team held a ceremonial groundbreaking for the future Tong Family Marina Sept. 15 along the Memorial Union lakefront, marking the beginning of the replacement of a 40-year-old pier system used by the Union’s Wisconsin Hoofers and Outdoor UW. The donor-funded, new pier system will enhance safety, increase boat storage efficiency, allow for the creation of a new park, and provide more on-land space for programming. The new pier system is expected to debut in summer 2019.

“This new marina will provide access to Lake Mendota in a safe, efficient, welcoming way that will allow many generations of sailors to experience the indescribable joy of sailing for decades to come,” Wisconsin Union President Mills Botham said.

More than 60 project supporters joined the Wisconsin Union team for the groundbreaking ceremony, including Janet and Peter Tong and their children Sarah Sangmeister, Jennifer Tong Carlisle ’94, Jessica Tong Baron and David Tong ’05.The Tong family’s $1 million gift to the Wisconsin Union along with the support of other generous donors helped make this marina possible. No taxpayer dollars are being used for this project.

“This lakeshore is absolutely iconic to Madison and to the university, and it is absolutely worthwhile to continually update its infrastructure and give it some love,” Peter Tong said.

The new state-of-the-art floating t-pier system will house the Wisconsin Sailing Team’s fleet of 420s and Badger Techs, freeing space along Lakeshore Path for new 330-foot-long by 24-foot-wide green space. In addition, a new crane will facilitate more efficient transport of boats to and from the water.

“We are extremely proud to be here today to mark this point in time, when the Wisconsin Union – along with our friends and supporters – commits to many more decades of outdoor recreational excellence by breaking ground on this impressive project,” Wisconsin Union Director Mark Guthier said during the Sept. 15 groundbreaking.

These improvements will benefit thousands of individuals who will use the pier system throughout the summer, including more than 1,000 Hoofer Sailing Club members, including youth who participate in the Club’s summer youth program. The Club has provided affordable, accessible sailing equipment and instruction, including lessons in keelboat sailing and wind surfing, to its members since 1939. The Club also creates community programs, such as an annual free sailing event for 50 athletes from Special Olympics Wisconsin and their coaches or parents.

Why is the marina called the Tong Family Marina?

How is the Tong Family Marina being funded?

Has the club met the fundraising goal yet?

Are there any similar marinas or piers systems on Lake Mendota?

Will the new piers be ADA compliant?

Will the Lake Lab building be replaced?

Is this project going to result in the termination of any current fleets?

Will the davit crane be open to the public?

Will there still be volunteer opportunities?

Will all individuals continue to be able to join the Hoofer Sailing Club?